How does the 'Translate on Local Axis' node work exactly?

Coming from BGE, I would have thought this node would translate an object on its local axes, as opposed to global axes which the Translate Object node does. It doesn’t seem to do that. In BGE you’d have a toggle between local/global axes for motion logic. How can I achieve sth similar with Armory’s nodes? Is there a way to ‘tell’ the Translate Object to use the object’s local axes? 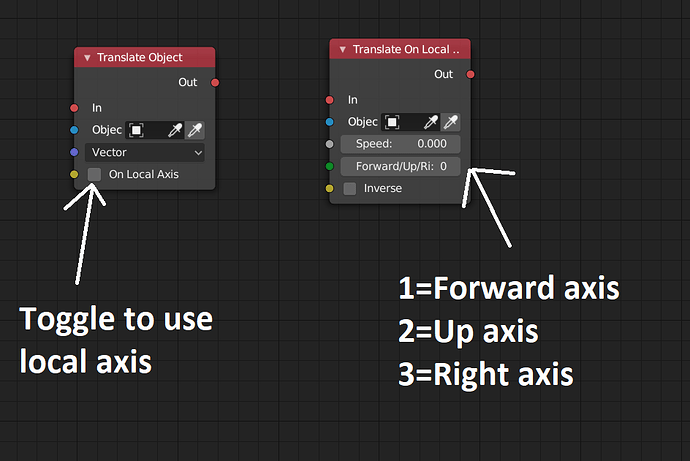 Thanks. The thing is, in the latest version of Armory the ‘translate object’ node no longer has the ‘on local axis’ check box. It took me hours to figure out how the input for Forward/Up/Right works (which is 1/2/3) on the other node, which seems to be the only way you can translate on local axes now…

Ehh the current version on Github has the local-option for the “Translate Object” node for sure:

You’re right, I’ve just updated the SDK to the one from 16 days ago or so and indeed the check box is there.

One other annoying thing that happened after the update though is that the search function in Nodes Editor ceased to work. Any chance you know how to fix this?

No I do not, happened to me as well and went away magically somehow.

Thanks. BTW, this latest SDK is giving me tons of errors when trying even the simplest thing like moving a cube with keys. Is that latest one (v12) stable?

I am getting the following AttributeError all the time: