A map made in BGE, would be cool to see same map in Armory

I’m a BGE user, i share this BGE map viewer I made .

As I never tried Armory, I would be glad if someone makes something similar with the same map and publish here a video of the result. I want to see what Armory has in its gutes.

BGE materials are not converted to 2.8 materials, so you’d definitely have to redo all of them again (just the single materials, the slots on the giant object where you did put them still exist) because I can’t be bothered to recreate that from your video. After tinkering a bit with the lights (remove all of them because their settings broke Armory) and scaling down the object I got this result. 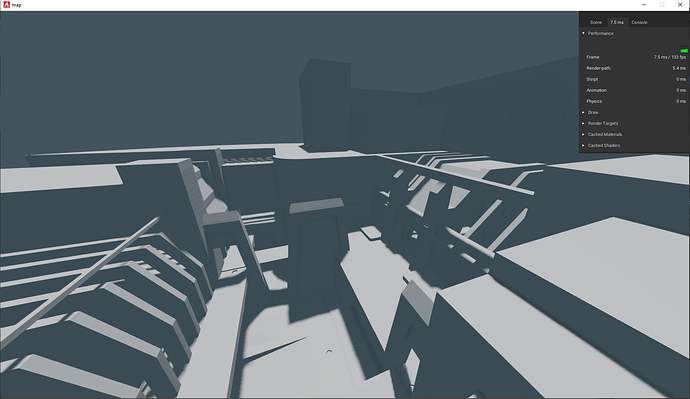 PNG1750×1014 197 KB
I don’t know if you actually wanted shadows and BGE just couldn’t do it or it was a stylistic choice but I put a sunlamp with shadows in there since there already were no materials. Running at a constant 145fps, could probably do much better if there weren’t so many slots with now the same default material in it on the object, and if the object were split apart to allow for culling.
1 Like
blenderaptor January 4, 2020, 11:17am #3

unfortunately, materials and stuff is probably the thing i’m the noobest in. I use 2.79 and never open 2.80 yet ^^ . You want me to convert all the materials to cycles ? I can try

Yes, with shadows it looks better. I don’t really ask the result for myself but for the whole Armory community. Because, sorry, for the moment, the only Armory’s demo map i saw is a basic square surrounded by walls

Congrats, for the 145fps. You have competitive computer ? Armory uses your gforce ? I’m just on old IvyBridge.

EDIT : okey, i converted the materials to cycles. I hope it will work

Do you think u can make a similar air-drone to show the map in a video ? Can’t wait to see what it looks like

Here I made a little video @blenderaptor

I really like the shadows and how it looks so clean. It’s a good demo/video for Armory

The song is a CC0 recommendation by YouTube. The new UI won’t let me look what’s name it was

Whose .blend was it then?

it’s by making cool stuff like this that people will be attracted to Armory (not like a Github page). It makes me want to switch to Armory . Since Armory runs on cycles, i presume it’s better to have a Gforce rather than an AMD Apu ?

Armory does only use Cycles material setup, it has it’s own entire rendering engine. So you should be able to use any GPU you like without any particular performance difference which is only brand related. But a weak GPU will not be able to put out as many frames as a good one, that’s just how it is. I have a GTX 1060.

I mean where did you get the map originally from? So I don’t claim it is yours in the title.
[Found the song title, Loop-Caught by Andrew Langdon, almost all the recomended Songs are by him/this publisher idk]

the map is from the game RedEclipse. If you edit your YT video, maybe add some tags to make easy for YT to show it as an Armory showcase ?

Could you please share the blend file with refined materials