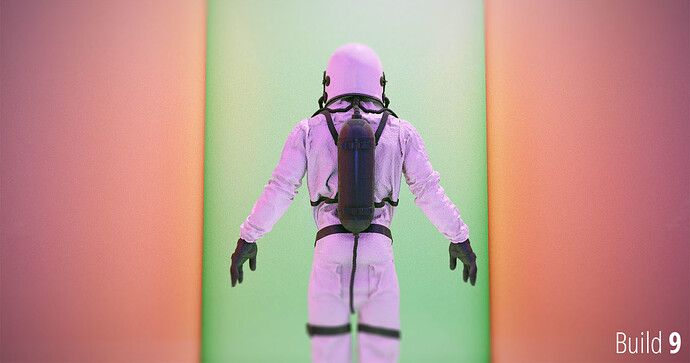 Model is Astronaut by Domenico D’Alisa

Another one down! Most of the work on Build 9 is dedicated to renderer speed-ups. A patched (9a) builds already got out yesterday, delaying these release notes a bit.
In case of issues, previous Build 8 is still available on itch. 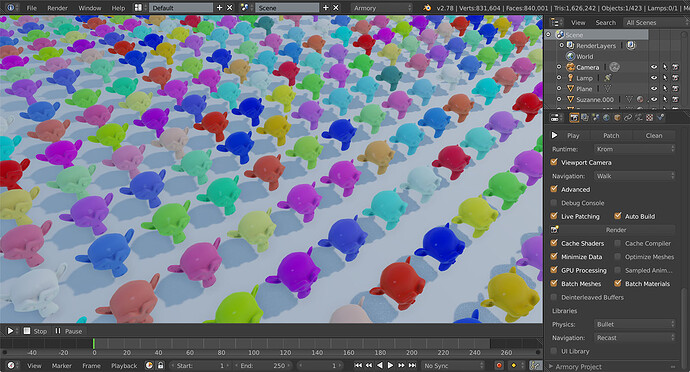 New example added on point lamp shadows. Finally, omni-directional shadows are implemented in Armory. Shadows are captured into a cube-map and each face culls out invisible objects. Of course this is still more costly than regular spot-lamp shadows. In case your point lamp is placed ‘out’ of the scene, you can disable omni shadows in Armory Props for a performance gain. 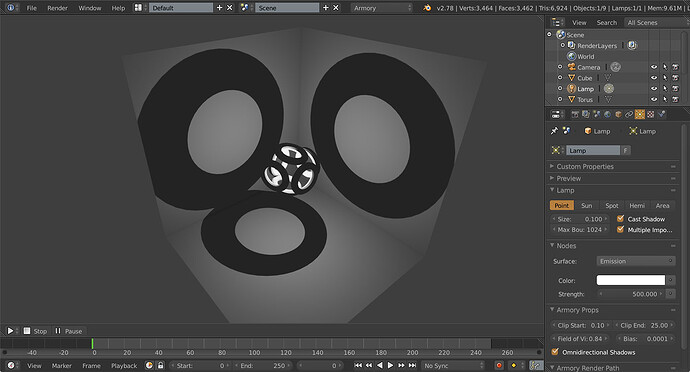 Created a new example to group small material tests. Object Info node has been implemented. (Thanks for report Petr Krejcik - if you are reading this!). 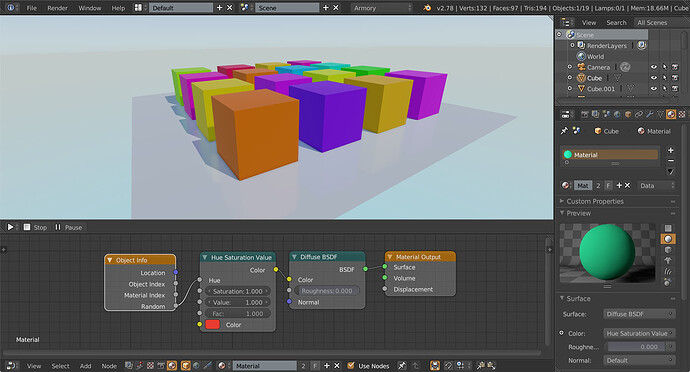 Hope nothing explodes and things get once again more solid.

Sweet! I got a question, perhaps a silly one, but is there something I’m not doing correctly to get glossy materials to reflect other objects in the scene? It seems to work just fine with the floor in the armorbench file when I run that in the viewport, but I can’t seem to replicate it any other time with other examples or scenes that I set up myself. I can easily get materials to reflect the environment map, but not other objects. I don’t think this is any kind of bug since I’m sure it’s something I’m not doing right on my end (as per armorbench working just fine), or at least I hope so. My system’s specs:

If this is a bug then I’ll be sure to submit an issue in Github, but I thought I’d ask about it here first. Thanks again!

In armorbench the floor reflections are using screen-space reflections(SSR). It is currently disabled by default to save some perf. Enabling is easy - select scene camera, scroll down to Armory Render Path in properties and switch the preset from Deferred Low to Deferred: Alternatively, you can enable SSR manually if you scroll further down: Need to somehow make this more clear. Let me know if that worked.

That was it, thanks Lubos! You rock

Build 10 still in the oven, should be out by Sunday.

A build cooking this long must be one big baby.

New builds already up on itch but still in testing before putting out the release notes - want to start making the announced builds a little more stable.

Good on you for taking the time for that. I appreciate release notes that give me a good idea of how to work with the improvements that I’ve been given instead of just listing the new features. Glad to see you’re taking the time.

He is for sure hard working on those things

I will start putting the release notes together immediately during the development to prevent waiting for that. Finishing the Scene 5 tutorial aimed at Logic Nodes next.