Just sayin’
I feel like it would help stream line the work flow a tiny bit if when you create a “New Trait Item” for Nodes, there is a +New button to the left of the Tree select box.

You name your new trait, it pops up in the Tree select, and in the Node Viewer. In the very least the +New button next to the tree select would be sweet.
Right now the work flow is like this:

It just seems like something that could be smoothed out a bit.
I don’t want to come across as critical. I really like this engine, I hope it doesn’t fall to the wayside in the wake of ArmorPaint. Who ever is working on Armory3D… keep up the good work.
M

I’m not very good at API (Blender and Armory3D), but I got curious, and I found it not a difficult task.
As a result, a button like this appeared:

Now, when creating a NodeTree, a window will appear for entering a name, and if there is an empty string in the list, then it will be installed there.

In order for this button to appear, you need to replace the engine’s Python script in the folder “…\ArmorySDK\armory\blender\arm\props_traits.py” with mine:
props_traits.py
Added ArmNewTreeNodeDialog class (line 475) and button description (line 774) to the script.

If the developers of the engine are satisfied with such an implementation, I will make a pull to the main repository.
Checked for version Blender 2.83.5

If you want an extra challenge, try implementing an operator that adds the currently opened logic node tree to the selected/all selected objects

Bonus points if you somehow get it on the logic node editor header, but I’m not even sure if that’s possible^^

Holy cow! Amazing!
Thanks
P.S. Just tried it out and it works like a charm!

I put it wrong: I know very little about the API (Blender and Armory3D), but I accepted the call. =) 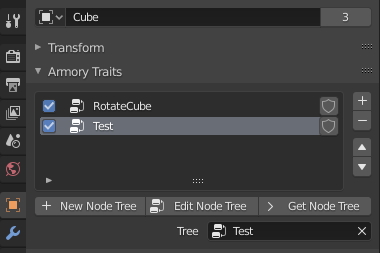 But because of the possibility of opening multiple windows with the Logic Node Editor, difficulties arise.

I’m waiting for suggestions on the name, description, icons for new buttons.

P.S. English is not my native language, so I use a translator and make mistakes

It’s a thing of beauty.
I’ll give it a shot later, and get back to you if I think of anything.
Thanks!
M

It’s a thing of beauty.

It really is, looking forward to the pull request

I’m waiting for suggestions on the name, description, icons for new buttons.

This is really nitpicky, but:

If you want some tips for Python:

That was a lot (sorry!) but those are just very small details. Great work!

There is this functionality in Unreal and Godot, but i don’t had tested it enough to say if is better or not. Also such button for edit Shader Nodes in material tab is way good. Probably will be one more thing for https://github.com/armory3d/armory/issues/1825.

To each their own, I understand, but I’ll be honest… I hate floating windows.
In Blender it’s easy enough to create your own Armory layout.
This is what Mine looks like: 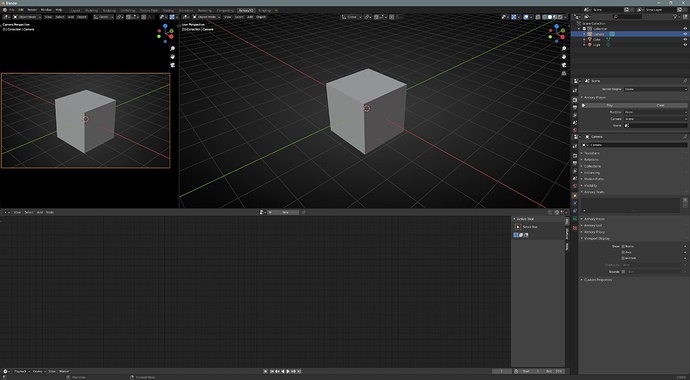 Actually I find your version more intuitive, so maybe change the order of those Haxe buttons?

Also, the Edit/Buttons could be greyed out if there is no logic tree

When working with Blender, I didn’t feel the need for floating windows.
My option is located similar to the one shown by the @Morbott

I also use nodes like that, but the real problem is when the logic starts to get big, you need to enlarge the screen at all times with each test you are going to do, and have to reduce the screen to be able to start the player.

Believe me, over time you will understand that with each click saved, your hand will thank you and even your mouse. Nodes have the ability to become incredibly confused when you have several of them.

Anyway, I only had a first experience with giant node trees and it was at the beginning (in a very simple game), but the workflow in relation to that at Godot seemed pleasant (as much as the visual script there is more complicated than the script itself).

Thank you for your replies!

Huuu… I recall there used to be a way to duplicate your window to a floating one… I don’t see it anymore. Maybe it got moved or removed. Hmmmmmmm 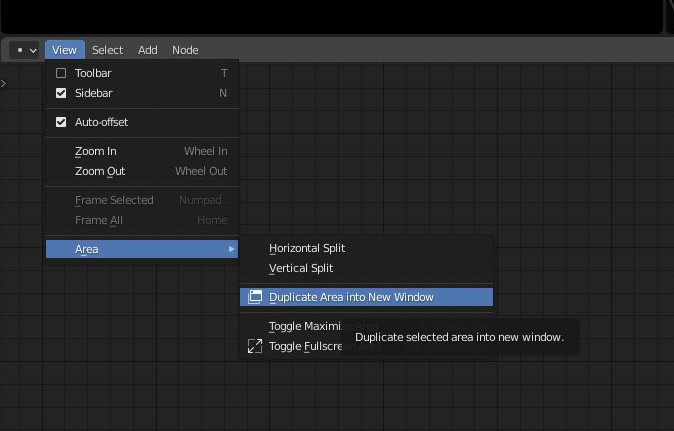 Does that help?
M

I didn’t know about this shortcut, thank you.

Also there is some shortcuts you can use to speed up things: Shift + F1…F12 to change the window type and Ctrl+Space to toggle the maximization state of the current window (the one with the cursor).

The reason why i suggest more intuitive buttons, shorcuts and layouts is for new users. I can edit somethings that i think will improve the things for me, but the more users happy, the more hope for Armory.

There is something in the small details that changes “everything”. For example everytime adding a new material need to change it for Armory PBR.

Update:
Found a bug in the enable/disable button From Node Tree.
A new version: props_traits.py