I’ve been experimenting with this node and I can’t make sense of the output values, I input the screen coors of my mouse, and the resulting coordinates range from 0 to a huge value, over 100 units, while my camera is 1 unit wide. 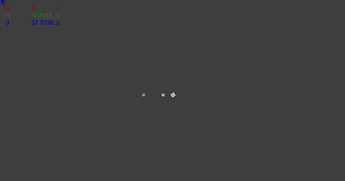 image1908×1005 14.3 KB
The first column of coordinates represents the position of my mouse cursor, that right now is where the blue arrow points. The second set is the output of the screen to world space node. Here everything is as expected. The camera is around 38 units up and looking straight down. 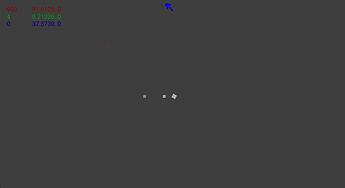 image1904×1041 18 KB
However, here with the cursor roughly halfway through the screen horizontally you can see that the X value of the output raises a lot, since my camera is 1 unit wide I expected it to range from 0 to 1 units.

¿Can someone explain me how this works and how to use it?

Sorry if this is poorly worded, I’m in a hurry and I can’t think of better words. Thanks for your patience

(Edited due to a mistake on my part)

The output of the “Screen to World Space” node seems incorrect.
I think it’s better to report on github.

I’ll report it then.
By the way, while trying to figure out how to do the same with haxe I checked the Pick surface node and I noticed a piece of code (physics.pickClosest), where could I check what it does?

0kay, just relized I’m an idiot, the scale may be off, but it’s consistent, on the first image the mouse was at x=950, not 650.
Guess I can just go ahead if I figure out a scalar vector.

It is not “Screen to World” information but “World to Screen” information, but important things are written here.

! I would draw a line with 2D API. But I don’t understand the “World To Screen Coords” logic Node : override function get(from:Int):Dynamic { var v1:Vec4 = inputs[0].get(); if (v1 == null) return null; var cam = iron.Scene.active.camera; v.setFrom(v1); v.applyproj(cam.V); v.applyproj(cam.P); return v; } I found a topic about “Screen to World” and so I try this : public function WorldToScreen(loc:Vec4):V…


This information is useful because the “Screen to World” conversion is the opposite of the “World to Screen” conversion, but it doesn’t seem to work well just by taking this into account.
1 Like
Quartz March 28, 2020, 4:24pm #6

Thanks, I’ll see if i can figure it out when I get the time.