Hi, after searching this on internet a lot i couldn’t find a clear answer to my need. So, as other people may have the same problem, i am sharing here!

Basically, you can’t get it to work with a single range. Visualize below: 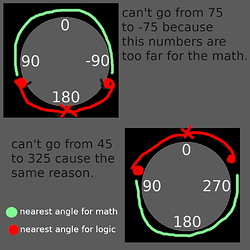 As you can see, we have two “walls” but thanks god they are not in the same place! We just have to switch between them.

Put it in practice:

And then, you have the “to” rotation. What you need to do here is to take the difference from this rotations.

The difference will be used to “detect” whether the rotation is too far from another (more than 180º). And if this is true, you just change this range to a -180, 180 range.

For radians just create two variables in the top of the script and replace them in the code:

Thanks to earlin that shared this method here: https://gist.github.com/shaunlebron/8832585#gistcomment-3227412 and also to Unity guy that write it

Alternatively, two “walls” are 2 directions where, for example, a player or an object should be looking. As a result, we have 2 vectors, and now we need to find the angle between the vectors:

Thus, we get the rotation value, and the value can be interpolated through any functions (lerp, tweening and others) depending on the task.