First time making my own post here. I have encountered something I am not sure if it’s a bug, or just the way Blender2.9/Armory works with regards to Linked Collections objects. I noticed I can link in a collection from another blend file into the current scene, and run an Armory game successfully. If that linked Collection contains objects that has Armory node trees attached as traits, those logic will work too when you play the game. However, what doesn’t work is trying to apply any new node tree logics in the current scene to the Linked Collection object. I have tested quite a few logic node commands such as “On Volume Trigger”, “Print”, “Get Location”, Translate Object", etc. They all seems to fail at outputing anything meaningful when those commands are acting on the Linked Collection object. I have included both the Blender 2.9 test blend file and the linked blend file. 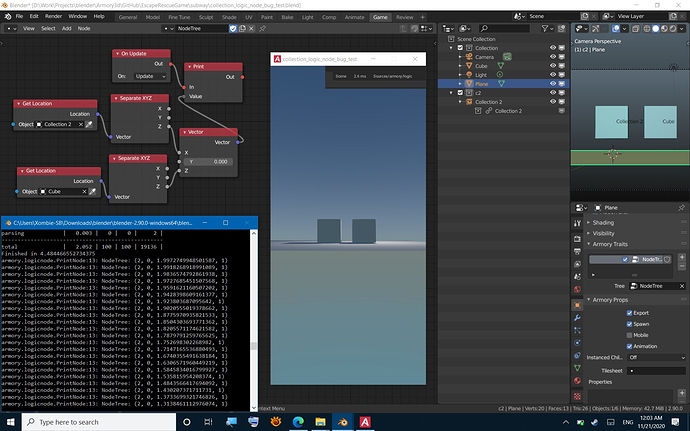 collection_logic_node_bug_test1920×1200 300 KB
In this scene setup (collection_logic_node_bug_test.blend), I have setup two cubes with dynamic rigid body, one is a geometry object and the other is a linked Collection object from an external blend file (collection_for_logic_node_bug_test.blend). Both cubes starts from a height of 2 Meters and falls down when the game is ran. I have setup the scene to print the Z location values of both cubes to the system console window with the “On Update” event. When you run the game, you can clearly see that regular cube’s z position value is tracked and changes as it reaches the floor plane. However, even though both objects falls the same way visually, the z position value of the linked Collection object does not get tracked properly and appears to be constant. It’s not Halloween anymore, so If anyone have more insight and can confirm whether this behavior is a bug or not, that would be great!