I need help regarding adding a trait to another (empty) when my (player) first collides with a certain object and when he stops being in contact with said object, the trait of the (empty) is stopped/removed to avoid these objects don’t spawn constantly and slow down the game
basically it is, if my character is in a “room” for example, the void will generate obstacles and when my character leaves from the “room”, the void will stop generating them.
the problem that I have in my file is that when my (character) collides with “the room” the game stops but does not close, it is as if all the features stopped working.
I’m definitely doing things wrong but I don’t know what, thank you very much in advance.
pos: I tried to add the feature to the beginning of the (empty) so that it generates the obstacles and stop it in case my (character) collided with another object that I chose but it did not work

the problem that I have in my file is that when my (character) collides with “the room” the game stops but does not close, it is as if all the features stopped working.

In most cases, this means that the game has stopped due to an error. You can find more information about the error from the debug console, which can be enabled as shown here

In your case, the error reads:

meaning, the object to which you are adding the trait is Null. Digging deeper, your node logic does not define the name of the child to add the trait to. 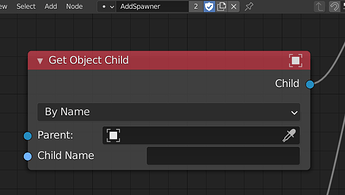 image710×403 31.4 KB
This might be the reason for this error. Alternatively, you could also use Contains or Starts/Ends with to specify only a part of the name.

However, I am not sure what you wanted to do in the RemoveSpawner logic tree. I have shown how it can be done in the fixed file below.

Here is the fixed file with all mentioned the changes:
(Add)(Remove)Trait_when hit with_Fixed.blend (1.1 MB)

Great, that’s what I wanted, thank you very much
Regarding adding the name of the object (child), the truth is that I did not know whether to put it complete or leave it empty, for fear that it would only have the name of a single (“spawner”)
and (in volume trigger) I use it because of the idea that it is a (room) where the character passes through
(on contact) I used it, but I didn’t know if the (trait) would be added again every time my (character) jumped while in the area.

One more query, with logical nodes (“set trait paused”) can it be done similarly? It is that before removing/adding the function, I had added the (“spawner”) at the beginning and my intention was to pause/resume but I had not found the option to (resume)(“set trait unpaused”)
again thank you for helping me,have a good day