Happy New Year!!! Hello my name is Shona and I bring you a question that is killing me inside, what possibilities are there to use armory for short films as a rendering engine? Imagine the possibilities! Edit videos in natron or blender in real time !!! Sounds crazy! Maybe I’m a little drunk, but let me dream a little! And again, happy new year!

Just develop your animations/shorts/movies using Blender’s usual NLA editor, and Dope Sheet, then press the ‘play’ button (or F5) to render the movie with Armory render instead.

You will have to use any screen recording software like OBS to record the screen and produce the video file, because at the moment Armory can’t produce video files.

Rendering movies with real time engines is called Machinima by teh way.

EDIT: I’ve tried it. It seems at this moment can’t render animations that way.
The ony way to render animation is like seen in the third example
http://armory3d.org/manual/getting_started/scene3.html

So is very basic at the moment. I hope it can take animations done with NLA and action editor eventually in the future.

For now in Render Panel -> “Armory Play” -> Advanced there is an option to capture Armory output as render:

So there is already something in development

Plus one for Machinima, didn’t even know it was called that. Gabe Newell has mentioned this concept in one of his talks about one possible solution to solve never ending bandwidth requirements needed by 4k and beyond resolution demands. Rather than widen the pipe more and more, change the pipe.

Also Blender NLA in realtime is on par with UE4 Sequencer. To be honest, when Sequencer came out I gave UE4 a real second look. It’s still on may radar, but ultimately my investment in Unity out weighed the switch to something else that wasn’t more open licensed. So I am saying, accomplishing something similar to Sequencer realtime would attract a different audience, and frankly draw more interest from blender community itself, because blender is highly built around film requirements anyways. 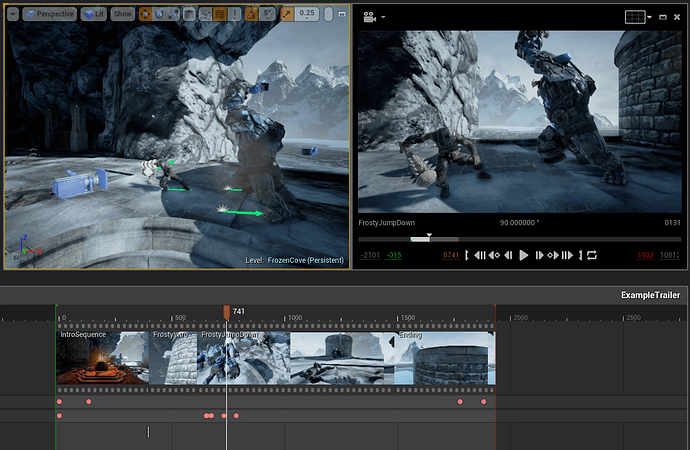 Any suggestions for small & short blends to aid in development & testing? For starters - the simpler the better.

I’ve got an old squash and stretch test animation with a box (poor topology but minimal so decent enough) that I could modify to give to you.

Regarding this topic, making machinima with Armory is the first thing which illusions me more, since it should need almost no options/tweaks, in difference to produce complete videogames.

But, I’m having problems taking to effect the theory of creating animations which involves more than 1 action.

In my first tutorial I covered scene 3 example only to the half. Now I have tried to develop the second half of the manual example, (http://armory3d.org/manual/getting_started/scene3.html) where it says how to include multiple actions and I’m unable to do it.

I have made two hidden videos in my channel where I show what I’m doing and the results I am having.
I hope somebody can tell what I am doing bad.

Video 2: Error when trying to use the NLA to join actions.

Machinima is rendering with games, not any real time engine. At least that’s its original meaning.

It would be nice if short movies were directly supported somehow. What if you could redirect the render target to a file or a Unix socket and then encode that with FFMPEG?

I would prefer a system where we can render into a not compressed format like image sequence 10 bit 4:4:4 color sampling.
Then you can compress with FFMPEG in the codec that you prefer.

Yeah but that can quickly become very large. I know this is supposed to be a “next-gen” engine, but not everyone wants to waste gigabytes of space for video conversions. If Armory could be persuaded in any way to write not just to files but to file-like objects, that would be enough for me.

But Blender already has FFMPEG afaik, so why not give the user similar choices that Blender gives? I don’t want to take the extra effort of compressing a simple test render I made to demo a physics setup, I’d be much happier if I could just output it into a quick and dirty lossy compressed format.

This is actually something I’ve been interested in since I first heard about armory. I do some logo design and animations, being able to render a high quality animation in real-time would be a huge advantage, and armory would certainly be able to drive some nice visuals with a good graphic card.
The question I have tho, would this HAVE to be real-time (renders are a constant speed regardless of the framerate) or would armory be able to slow down if needed (renders at a constant framerate regardless of speed)?

Also a quick note on the subject of compression: especially if armory has to render out real-time, you REALLY don’t want to deal with an uncompressed image sequence - HD video would end up being (1920px * 1080px* 30bit * 30fps) = 222MB/second of data, not even counting the file overhead, so you would need a nicer ssd to even think about rendering this… and if you wanted to render 4k? heh.