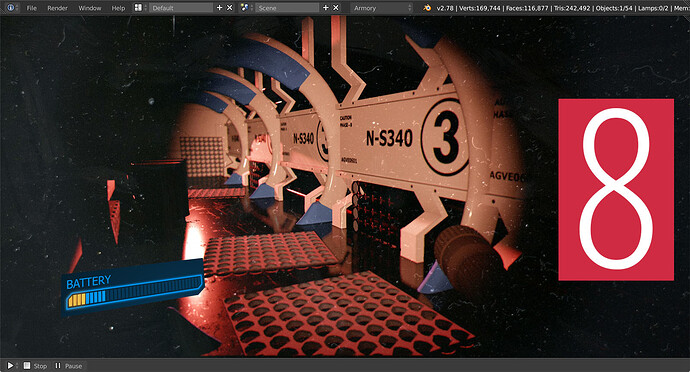 Yes, finally there! This one took a while - the biggest Armory release yet. There are tons of changes under the hood, in case of issues the previous Build 7 is still available on itch.

Changes since last build:
(You may have already seen some of this)

Sorry about the wait for Build 8 - please let me know in case of any issues!

Dam cool, i’ll try everything with my characters to see if it’s working.

cool. how it work and where can find the new 3D painting ?

Super release! thank you !
I will try to test all new features as soon as possible.

I still have problems with live patching:

Hello, with live patching enabled when i try to touch material nodes the Node view switch automatically to 3D view and Live...

Will get the 3D painting out soon, needed a bit more time:/

Was waiting for this build before taking the plunge, and so I did! Playing with some of the examples now, and will try and contribute to bug fixes if/when I find any. Very excited!

I will test Build 8 more in next days!
Great work with all the new features!

I’m liking the build. It seems to have some work done on the animation system.
Currently, I managed to import a Skeletal Mesh with an armature and a basic animation of a character moving an arm.
The engine didn’t crashed. On the contrary hand, it rendered half of the mesh dissapeared and with severe deformations on the other half. Anyways, the important thing is that the engine didn’t crashed!

At this moment I’m training character design everyday like a beast. I hope to use this engine to render simple character animations in August/September having Armory as my main renderer at that point.

Keep up the good work!

Glad to see the build it out @lubos I’m super glad that I can now turn off autosave and take the risk into my own hands (as well as not have to save pointless throwaway files) and even happier that the node system foundation is in. Looks like it’s time to start brainstorming what build 10 will be focusing on huh? Anyways. Super glad this held up.

I’m getting a few dependencies issues on Linux Mint 18.1.
The first it complained was easy to upgrade, but at the moment I can’t upgrade to the:

I have the 1.58 version so it seems… will try to find a solution.

have you updated to Armory_p08b ?
The new patch fix some Linux issues.

Haaa, no I did not

Thanks for the heads up, will download it immediately!
Edit: Yup! It worked, all good now!

Sorry I did not mention updated builds sooner, was unsure whether more issues pop up. Seems to be more or less solid now, at least to a level it was before, so hopefully no more patches.

@Jose_Antonio_Moliner: Yes, some little animation improvements are in - more to come in next build!

we will have new build this friday ?

Good progress on build 9 already, but scheduled for Monday currently to pack in more stuff.

Wow, an actual release window prediction and an on time one to boot!? What has the world come to!? Congrats by the way. I look forward to it.

Finishing last bug fixes and then the packaging begins, new builds on itch tonight or in the morning if I fall asleep during upload.

Every time @lubos falls asleep while working on a build, a developer cries on the inside.