I am using the latest version. I made a simple tree to move my camera. But for some reason, that logic just deletes whatever object I use it on as soon as it is triggered. I know that it deletes it and not just moves it out of view because I used it on a sun lamp and the lighting disappeared 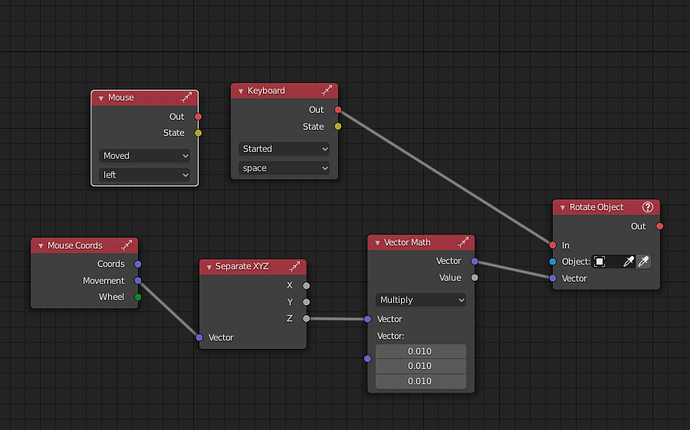 The object disapears because you give it an broken Value to as a rotate Vector. Vector Math expects Vector inputs (Purple), you plugged a Float value (Grey) into one of its Sockets. To prevent this you need to put a “Vector” node between your “Separate XYZ” and “Vector Math”.

This did the trick on my object! Also, where is there a minimum of 20 characters? Such a silly and limiting rule

Yeah for some reason it still doesn’t work on my camera. It actually has no effect on it. I created a cube that I made the parent of the camera. And the camera disappears again.

Maybe one of these options will help:
1.FPS controller with nodes simplyfied
2.Third peson character control with logic nodes
3.https://devga.me/tutorials/armory3d/cameras-character-controllers/